It's been a long week.... Last round of candidates in for a position in the department, conference week for students in my senior seminar, and the pollen's got me down.

This is the longest break I've taken from posting here, and it wasn't intentional; in fact I didn't really realize how long it had been.

I'll get something up soon, but for now, a few quick notes:

Eddie Hunter is a wonderful guy. Look how nice he is! He lives down the road in Marietta, Georgia, home of the Big Chicken and Eddie's blog, Chicken Fat. Eddie writes about his people-- family and friends-- and recently he posted a photo of himself as a kid with Smiley Burnette. Wow.

Jeremy Boggs, of the Journal of the Association for History and Computing, has a column titled "History Blogosphere: An Introduction." Boggs lists a handful of the best history blogs, and two of them, Civil War Memory and Cliopatria, are on my short blogroll (to the right). I knew I travelled in good company! (Kevin Levin's Civil War Memory has a good and thoughtful bunch of postings up now.)

The conference paper got finished and sent off to the commentator on time; the conference is in a couple weeks. Now I'm working on an encyclopedia entry on William Ellery Channing, who might be called the father of American Unitarianism. Umm, well, in fact he IS called that. 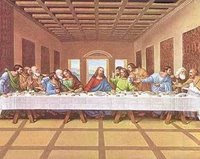 Clio Bluestocking presents a very interesting new reading of The Last Supper in Another DiVinci Code. I don't want to spoil it TOO much, but her posting was prompted by the Bong Hits 4 Jesus controversy and an article in Slate.com asking "What Would Jesus Smoke?" A bumper sticker here in the parking lot: "What would Scooby Doo?" Clio says something about a Ganga interpretation of Scooby Doo. I have no idea what she's talking about.

J.L. Bell reminds us that the bicentennial of Henry Wadsworth Longfellow's is fast approaching. J.L. posts a lot of good, solid stuff, both at Boston 1775 and at Oz and Ends, on children's literature (which I just realized contains a different Longfellow posting!).

The Carnival of the Decline of Democracy, Edition 2.6, is up at The 13th Story. Again, good stuff! And don't miss the first appearance of Blog about Your Blog.

All right, back to work.
Posted by Another History Blog at 9:29 AM