Faith healing-- Parts I and II of Brian Lardner's series on faith healing are up, and as we wait for the third and final posting of the trilogy ("in which we help to make Benny Hinn a very rich man"), he teases us with a bonus: Brian Lardner as faith healer! (Instead of clicking these individual links, you could just go over to Primordial Blog; as I write this, they're all still on the front page.)

Charles Atlas and sexy chimps-- Brian also writes about the "Sexiest animal on the planet: Chimpanzees." Somehow, it doesn't make me feel better knowing the biological reason girls ignored me in high school.

competitor, regardless of their manners. At times they will actually incite competition between two males. In the movies it is the stuff of tragic love triangles, but in real life it can often be brutal and ugly. It kind of reminds my of those old Charles Atlas ads in the back of the comics from when I was a kid - the 98lb weakling getting sand kicked in his face by the bully who then steals his girlfriend."

Ahh, Charles Atlas. Now there was a cultural icon. And today, my students have no idea who he was. Not too long ago, I could mention "Charles Atlas" in class and know that a significant number of students would understand. If I mention him today-- nothing. That's a shame, isn't it? Or am I being an old fuddy-duddy? (I feel sort of fuddy-duddyish today.) But what symbol do we have to replace him? Rambo isn't quite it.

Turabian-- A new edition, to be published April 15. I got an early copy last week. Oh, I do love St. Kate. When she died, in 1987, her obituary in the New York Times noted that 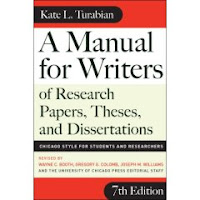 she never received a college degree. Did she ever go to college? I don't know. But I think it's pretty neat that the woman who wrote the book that has guided hundreds of thousands of academic papers, from research papers to doctoral dissertations, never graduated college.

The obit explained the book's origin: "In 1930 the university [of Chicago] appointed Mrs. Turabian as the dissertations secretary. She was charged with coordinating the administrative logistics for graduate dissertations. Noticing that some students could not afford the University of Chicago Press Style Manual, Mrs. Turabian boiled down the larger volume into a pamphlet."

Turabian (as we all call it) is said to be the most profitable book ever published by the University of Chicago Press.

I've got Kate on my mind today. In my methodology course this semester, I assigned, on the advice of a colleague, a different book. And now my students have no idea how to do footnotes. I know, because we had that class this morning. It's not their fault, it's the book; I didn't realize how bad it is.