pink and yellow, blue and white, they're all precious in my sight

Blue books typically contain several sheets of wide-ruled notebook paper and have the words "Blue Book" across the front. However, the books' covers do not necessarily have to be blue; some schools use pink, yellow, or white covered exam books.

But now I'm curious-- Why are blue books blue (usually)? Who started that? Maybe something as simple as the printer had a lot of blue paper stock.

Posted by Another History Blog at 2:01 PM

more yellow ribbons than you can shake a stick at

Ed Brayton, at Dispatches from the Culture Wars, links to a video from the Asylum Street Spankers titled "Stick Magnetic Ribbons on Your SUV" (to the tune, of course, of "Tie a Yellow Ribbon 'round the Old Oak Tree"). What got Ed started was all the bunkum on Barack Obama's decision not to wear an American flag pin on his lapel; the whole posting is worth reading.

Gerald E. Parsons, a folklorist with the Library of Congress's American Folklife Center, wrote a brief article on the origin of the yellow ribbon. Neat stuff. (There is a brief but updated bibliography at the end.)

On Educated & Poor, I saw this banner. It and more are available here.
Posted by Another History Blog at 1:17 PM

Tomorrow, students in my methodology course learn to do footnotes, and when I say "footnotes," I mean, of course, Turabian.

Historians, from undergraduate majors on up, will recognize the name. Turabian is our bible ("The Gospel According to St. Kate") for citation formats and style. (Miss Ash, who is going to be a history major but pretends not to know it yet, will soon have to learn the rigors of Turabian. She needs the discipline--no pun intended--as she recently came out for "hot pink" blue books.)

The 7th edition of Turabian was published this past April, and for the most part, it's good. But the editors for this new revision did a couple of things that I find disturbing. First, they made "ibid." optional. ("Ibid." is the abbreviation used in notes to indicate that the citation is the same as that in the previous note.) No, that's not exactly right. They don't really offer ibid. as an option. They say that in such circumstances one should give the name of the author (or author/title), and then they offer this little gem: "Some writers still use 'ibid.' to shorten a citation to a work whose bibliographical data appear in the immediately previous note." Did you get that patronizing tone? "Some writers still use...." The Sixth edition prescribed "ibid."; now it's "some writers still use...." Well, I'm an ibid. kind of guy, so I guess that makes me "some writer" (and it makes me feel like Dr. Fossil).

Second, the editors added a completely new section, "Research and Writing: From Planning to Production." Generally it's quite good, but in the chapter titled "Planning Your Argument," they employed the Toulmin method of argumentation, which includes "warrants," "claims," "qualifiers," and other bunkum. Students don't get it, and I understand it just enough to know that I don't, either. We do talk about logical fallacies, but that comes in a couple of weeks. Tomorrow, it's footnotes, and I'm going to let 'em know that ibid. is still OK.
Posted by Another History Blog at 7:39 PM 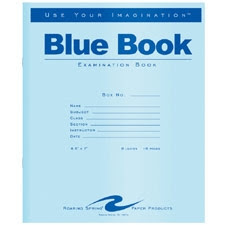 Stoned young male voter: “What if I don’t have a blue book?”


Roaring Spring Paper Products recently came out with an examination book made of recycled paper. The cover is green, of course. We (faculty) got an e-mail message from the bookstore at the beginning of the semester to let us know that the new exam book was available and to alert us to a potential problem: "A large number of students are hesitant to purchase the 'Green Book' since you have specifically told them to buy a 'Blue Book.'"

I told my students either was OK. A colleague told his students that they might want to avoid the new one--"You don't know where that recycled paper has been."

I like the old blue books, though. Come exam time, a pile or two of blue books on the desk seems about right.

Green books, on the other hand, sound too damn cheerful.
Posted by Another History Blog at 8:56 AM

another word for "claptrap"

A few days ago, I posted a brief note about John McCain's recent "claptrap" about the United States being a "Christian nation." And yesterday, in a conversation with a friend, I mentioned Asheville, North Carolina, where I was born. I wish those two events had happened in reverse order, because then I might have used a better word than "claptrap": bu******.

To explain, I will take the lazy blogger's approach and reprint a piece I wrote for my local newspaper a few years ago.

From Buncombe to Bunk

In 1816, the people of western North Carolina elected Felix Walker to represent them in the U.S. House of Representatives. Walker was a colorful figure. He had traveled west with Daniel Boone to help establish the community of Boonesboro, Kentucky, and fought in the American Revolution and several Indian wars. He was a farmer, a merchant, and a land speculator. For several years, he was successful in state politics. Then, at the age of 63, he ran for Congress as a Republican (a Jeffersonian Republican--the modern Republican party wouldn’t form for almost forty years).

Although he was reelected twice, his career in Washington was less than spectacular. Realizing that he needed to keep reminding the folks back home that he was on the job, he made a speech in 1820 that ended up putting a new word into the English language.

The occasion was the congressional debate over the admission of Missouri as a state. The issue of slavery entered the debate when a northern congressman tried to amend the Missouri statehood bill so as to make slavery illegal there. Walker had little to say about what would become known as the Missouri Compromise, but he knew that his constituents expected him to say something. So on February 25, 1820, he rose to address the House.

Walker talked and talked, but said next to nothing. His colleagues, weary with the debate, urged him to sit down, but he kept going. Finally he admonished his detractors by saying that he was not speaking to them, he was speaking for the folks in Buncombe, one of the counties in his district. (Asheville is the largest city in Buncombe County, named for Colonel Edward Buncombe, a Revolutionary War soldier from the area who had been captured and died while still a prisoner.)

When people read the speech, reprinted in a Washington newspaper, they agreed that he had been “speaking for Buncombe,” and the phrase soon became popular for any frivolous, irrelevant, nonsensical, or questionable remark. By 1850, the word was often spelled “bunkum.” By the early twentieth century, it had been shortened to “bunk.”

One of the most famous uses of the word “bunk” is, unfortunately, one that I as a history professor have to hear occasionally from disgruntled students: Henry Ford’s comment that “History is bunk.”

Actually, that’s a misquotation. In 1916, a reporter for the Chicago Tribune questioned Ford about his opposition to building up America’s military strength in light of the war in Europe. The reporter pointed out that, a century earlier, only England’s powerful military kept Napoleon out of Britain. “I don’t know whether Napoleon did or did not try to get across there and I don’t care. It means nothing to me. History is more or less bunk. It’s tradition. We don’t want tradition. We want to live in the present and the only history that is worth a tinker’s dam is the history we make today.”

Cultural critic Robert Fulford was perhaps being a bit generous when he wrote that Ford (who was actually something of a history buff) “thought that devotion to the past prevents us from grappling with the present and may encourage us to make war out of historical grievance. In 1914 all the European leaders knew history, Ford said, yet they blundered into the worst war ever.”

Still, I can tell my students that Henry Ford didn’t really say “History is bunk,” and he didn’t really mean that history is (to quote Roget) “balderdash, blather, claptrap, drivel, garbage, idiocy, nonsense, piffle, poppycock, rigmarole, rubbish, tomfoolery, trash, twaddle,” words that might be used in place of the “bunkum” inspired by Felix Walker.

The above first appeared in the Cartersville Daily Tribune News, August 1, 2004. Any of the listed words in that last paragraph could apply equally well to McCain's pronouncement.
Posted by Another History Blog at 2:34 PM

Ed Darrell, over at Millard Fillmore's Bathtub, has the best discussion I've seen of why John McCain was wrong with that "Christian nation" claptrap. Read the whole thing.
Posted by Another History Blog at 12:29 PM