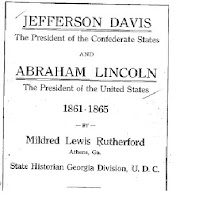 Today is Kennesaw State University's New Interpretations of the American Civil War Symposium. This year's topic: Envisioning America: The Leadership of Abraham Lincoln and Jefferson Davis. We have four of the best Lincoln and Davis scholars around: William Cooper, George Rable, Brian Dirck, and Stephen Berry.

Mildred Lewis Rutherford, state historian of the United Daughters of the Confederacy for Georgia, made that same comparison almost a century ago in a little booklet she published. Given her affiliation, perhaps it's not a surprise that Lincoln came in second. Davis, she said, was a Christian, a humanitarian, a philanthropist, a patriot, a statesman, and a scholar. As for the U.S. president: "Shall Lincoln be held up as an exemplar for the imitation of our American Youth? We cannot hold him up as a GENTLEMAN OF REFINEMENT AND CULTURE.... We cannot commend Lincoln for integrity of character.... We cannot hold him up as humane or tender hearted.... The evidence is very strong against him as a VIOLATOR OF THE CONSTITUTION." And so on.

Well, I guess that settles it. No need for the meeting now.
Posted by Another History Blog at 6:47 AM