Georgia on My Mind has a nice posting on Dade County, Georgia. Legend has it that, back in 1860, when the state didn't secede fast enough to suit some of the hot-blooded citizens of Dade, the county decided to secede from both Georgia and the Union.

According to a 1945 article in the Atlanta Constitution, “Folks in Dade were big slave-owners and rabid secessionists." Representative Bob Tatum made a fiery speech in the state legislature: “By the gods, gentlemen, if Georgia does not vote to secede immediately from the Union, Dade county will secede from the state and become the independent state of Dade.”

When the state refused to act, Tatum left Milledgeville (the capital at the time) and returned to Dade, where he conducted a public meeting on the courthouse square in the county seat of Trenton. Under his guidance, the people of Dade County voted to secede from Georgia and the nation. After the vote, according to the newspaper, “the impatient Tatum actually sent a secession proclamation to Washington.”

Although neither Georgia nor the United States recognized the act of secession, Dade kept its claim of independence until the summer of 1945 when, flush with patriotism and national pride over the coming victory in World War II, the people of the county voted to rejoin the state and the Union.

The 1945 "reunion" was covered widely by the press. Even the New York Times reported “Dade County Ends ‘Secession.’” President Harry Truman sent a telegram of congratulations from Washington, ending with “Welcome home, pilgrims.”

The story of the county’s secession and the resulting Independent State of Dade is still told and accepted. The problem is, it seems that it never happened.

Professor Ellis Merton Coulter, of the University of Georgia, published an article in the Georgia Historical Quarterly back in 1957 that convincingly refutes the story of Dade’s secession. 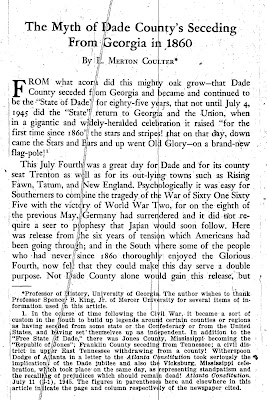 First of all, Coulter pointed out that the people of Dade were not “big slave-owners.” “Dade County in 1860 had only 300 slaves owned by 46 people out of a total white population of 2,765,” he wrote, “and of those slaveowners only an even dozen held more than ten and only two owned as many as thirty.”

Throughout the state, there was a correlation between slave ownership and support for secession. Perhaps the people of Dade bucked the trend? But Coulter pointed out that the county’s delegates to the secession convention of January 1861 voted against every secession measure, and those delegates had been elected by a popular vote that favored, by a margin of 9 to 1, the “cooperationist” (anti-secession) candidates.

This was very much an anti-secessionist section of the state. In neighboring Walker County, a man wrote a letter in Feb. 1861 to Governor Joseph E. Brown: “We, the people of Walker County and Dade County, Georgia, do not intend to submit to [the] decision of the secession movement. . . . If southern Georgia wants to leave the Union, let her go. But, we want to stay in the Union."

What about Tatum’s speech threatening the county’s secession if Georgia didn’t act? Coulter searched the major newspaper across the state and found “not the slightest indication of such a speech,” and surely such a speech in the General Assembly would have been reported.

The alleged secession proclamation sent to Washington has never been found.

Tatum himself served two more years in the Georgia House, something he would have been unlikely to do if he believed his county had left the state.

According to Coulter, no one has been able to produce a single contemporary account of the county’s secession.

Ironically, the phrase “the state of Dade” was used even before the Civil War, referring to the county's geographical isolation. Because of the presence of Lookout Mountain, there was no way to drive into the county from Georgia until the late 1930s; one had to leave the state and enter Dade from Alabama or Tennessee. 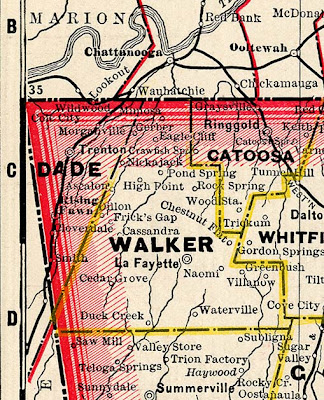 The New Georgia Encyclopedia has a good article on Dade County history.
Posted by Another History Blog at 10:18 AM