Milledgeville in the Spring

I started to title this “GAH conference report,” but then I figured folks would go right past it.

The annual meeting of the Georgia Association of Historians was this past weekend in Milledgeville, a beautiful town I had never visited. The ride there on Friday morning was as pleasant as any I’d had in a long time-- getting out of that Atlanta-area traffic, driving down highway 441 through Putnam County, “Dairy Capital of Georgia”-- the fields, the cows, the pecan trees, very pretty. About two Baptist churches every mile.

Milledgeville is fairly small, easy to find your way around, whether you’re driving or walking. I arrived at 10:30, too early to check into the hotel or register for the conference, so I 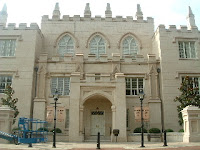 drove around and ended up at the old Georgia Capitol. (Milledgeville was the state’s capital from 1807 to 1868.) The capitol building is now part of Georgia Military College, but the bottom floor is devoted to a museum of regional and state history. When I walked in, I was alone, no one there (that I saw) except Grant Gerlich, the exec director, and one of his staff. Grant reminded me of the Maytag repairman, sort of lonely, waiting for a call. He didn’t say so explicitly, but I got the idea that the Old Capitol Museum, as it’s called, doesn’t get a lot of traffic, and that’s a shame. It's worth a visit. Its American Native section is especially impressive.

Then, check in to the hotel and off to the conference. I got there just in time for the first round of sessions. I went to “Holocaust Fatigue: Is the Holocaust Losing in the Classroom?” The participants were from Kennesaw State University’s Holocaust Education program, and the session was quite thought-provoking--about how we teach not only the Holocaust but other subjects, and the differences between education in the classroom and in museums.

Second session, I went to “Politics and Law in the Antebellum South,” with papers on poor whites in

Georgia and on Georgia’s opposition to the Tariff of 1828. The first, by Keri Leigh Merritt, was based on some impressive research in court decisions concerning vagrancy cases. The second, by Donald Clanton, suggested that the reason Georgia didn’t go along with South Carolina’s nullification of the tariff was to stay on Andrew Jackson’s good side, so he would carry through on his promise to get rid of the Cherokee Indians. I'm not fully convinced, but the notion is very interesting. Merritt and Clanton are both MA students, and they showed that grad students, even in the early stages of their research, can present at conferences such as the GAH and be not only welcomed but appreciated.

After a break, the evening plenary session, featuring Arnita Jones, executive director of the American Historical Association, speaking on “Trends in the Historical Profession.” It was a good and informative talk, but it got off to a funny start. After the

program began, but before Jones was introduced, a cell phone went off in the audience. Great, I thought; we get mad at our students when this happens in the classroom, and here we are doing it ourselves. And then, two or three minutes later, another phone went off! There was laughter, and folks were probably wondering, as I was, why, after the first incident, everyone didn’t check their phones to make sure they were turned off. Then Jones started speaking, and guess what happened. Yep, it sure did.

Second day, I skipped the first morning session (I know, bad boy) and drove around town. My session was at 10:30. I talked about Georgia-born writer Marian Sims as an early “revisionist” novelist. Also on the session was an old friend of mine, Catherine Oglesby, who has just submitted a book manuscript on another Georgia writer, Corra Harris. Cathy talked specifically on Harris on race and the Lost Cause. She’s been working on Corra for so long, writing and presenting, that when she said “Harris was best known for her 1910 novel A Circuit Rider’s Wife,” I wondered how many times she has said and written that sentence. It was a good session, thanks in part to the good audience that attended.

Lunch/final plenary session: The chicken tasted funny, everything else was OK. My Kennesaw colleague Tom Scott had arranged the program, which featured two famous Georgia historians, Tom Dyer and Edward Cashin, talking about their “Lives in History,” as the program was titled. I thoroughly enjoyed it. I wish my students could have heard Cashin talk about historic myths-- how they come about and what uses they serve.

One of the best things about these conferences is being able to see and catch up with folks.

Anyway, that’s how I spent my weekend.
Posted by Another History Blog at 1:39 PM