A few days ago, somebody told me I look like Bill Gates. I'd rather have his money than his good looks, I said.

But really, I don't see it. That's Bill Gates on the right, me on the left. 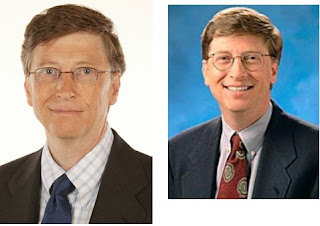 I heard a story about a guy named Stan at a conference where Bill Gates was speaking. After Gates's talk, Stan approached the front of the room and asked Gates if, as he left the room in a few minutes, he would walk by him and say Hi, just so Stan could impress his friends. Gates said he'd be happy to help him out. So, Stan and his friends are standing at the back of the room, Bill Gates walks by, smiles and waves and says "Hey, Stan, How are you?" and Stan says, "Shut the hell up, Gates, I told you not to bother me any more."

Anyway, I wonder if Bill gets that? "Hey, you look like David Parker."

Actually both pictures above are of Bill Gates. I look like this (or rather this is what I looked like one hot day last summer when I was looking too much toward the sun, apparently just after a rather severe haircut). Nothing like Bill Gates.
Posted by Another History Blog at 10:40 AM