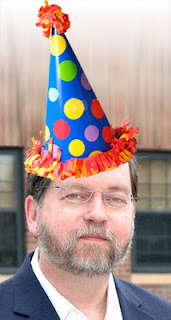 Yesterday, P.Z. Myers announced: Yes, I will be HALF A CENTURY OLD tomorrow. He invited everyone to write a poem for his birthday. As of right now, that posting has received 166 comments, most containing poetic birthday wishes.

The picture on the right is from Richard Dawkins's website. Dawkins started the greetings-in-rhyme with the following:

All around the World Wide Web, the wingnuts get the crepys,
As the faith-heads take a drubbing from our era's Samuel Pepys,
That sceptical observer of the scene about the wyers,
At Pharyngula, the singular redoubt of P Z Myers.

UPDATE: He has A LOT of friends. If your internets seem slow today, it's because everybody is wishing P.Z. happy birthday. See here, and here, and here.
Posted by Another History Blog at 12:53 PM