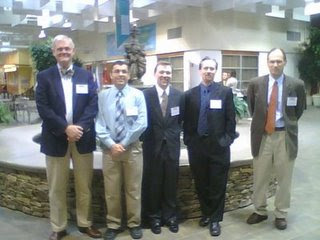 Over at A. Lincoln Blog, Brian Dirck writes about his recent speaking engagements (see, he's a Lincoln scholar, and this was the bicentennial of Lincoln's birth, so he's had a lot of invitations to speak), including one here at Kennesaw State University. I especially like the photo, which shows the four speakers at our day-long symposium: William Cooper, Brian Dirck, Stephen Berry, and George Rable. The guy in the middle is my colleague John Fowler, director of KSU's Center for the Study of the Civil War Era.
Posted by Another History Blog at 11:41 AM